How did the look of Cyprus island develop

The Cyprus island is 9,251 square meters, making it the third-largest island in the Mediterranean. The island is divided between two states: The Republic of Cyprus, which conventionally belongs to the Greek side, and the Turkish Republic of Northern Cyprus.

The Northern Cyprus coast is surrounded by the Mediterranean Sea waters. It is not far from here that Syria is 105 km away, Egypt is 380 km away, and Turkey is 75 km away. The island has an ancient history that goes back about 200 million years.

The island mountainous relief is due to the continent’s long-term shift, the seabed rose and formed dolomite and marble rocks, which are over 100 million years old. These are the Troodos and Girne mountains.

Initially, there were several islands separated by shallow waters. In the raising seabed process, the Mesaorian plain was formed, and the island became solid. 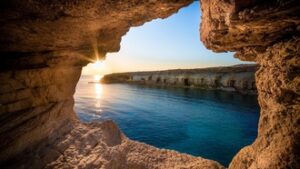 The island northern part coastline has smooth outlines, and the most prominent capes are Korucham in the west and Zafer in the east. The picturesque Famagusta Bay on the east coast attracts tourists and locals alike. If the traveller wants to find the most picturesque beaches, the Kapraza reserve untouched nature will be an excellent option.

Harbours, bays and grottoes are located along the Northern Cyprus entire coast, many beaches are hidden from prying eyes, here the rest is secluded and peaceful. Many hotels are located on the beach, so the infrastructure on the beaches is good. Optimal to buy real estate in North Cyprus near the sea to have additional income in the season, renting out an apartment. Plus, the island’s beaches are more environmentally friendly than the resort areas of many Mediterranean countries.

The mountain’s unique landscapes and plains have influenced flora and fauna diversity. The Beshparmak mountains reach an elevation of 1000 meters above sea level, and the highest mountain, Seveli Peak, rises by 1023 meters.

On the Northern Cyprus vast plains, crops are grown and cattle are grazed. The cliffs protect the beaches and the Cyrene mountain range creates a natural barrier to the sea winds. In the island centre is the Mesar’ya plain, which is the agriculture centre: grain and cereals are grown.

Thus, the country is an excellent picturesque place where you can buy housing in North Cyprus inexpensively.