Popular among tourists and locals are the cities of Lefkosa, Guzel’yurt, Famagusta and Kyrenia.

It is hard to list all the sights of the country, the most famous and picturesque:

It was built by the Byzantines in the Tenth century, and the Lusignans and Venetians continued to build it. The fortress has always served the city inhabitants because Kyrenia has never been stormed by enemy troops.

The palace is located in the Girne city and is located on a clifftop. From a height of 730 meters above sea level, mountains picturesque views open.

A fabulous little village on a hill. Cobbled streets, beautiful limestone stairs. A must-see church where the icon museum is located.

The Ottoman period artsy architecture, the building was contracted at a time when the Ottoman Empire fought the Venetians. Not far from the mosque there are marble burials of famous Turkish Cypriots and a picturesque fountain.

A notable place in Northern Cyprus, notable for the Virgin Mary fresco, which dates back to 500 BC. The most valuable Christian artefact that was dismantled and taken to America. After lengthy legal battles, the fresco returned to the island.

Herbarium – there are up to one and a half thousand unique plants. The herbarium is always open and can be visited at any time of the year. It houses an impressive collection of orchids with over 50 varieties. 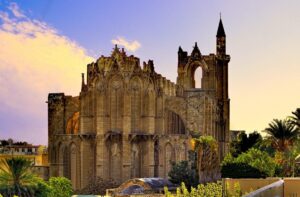 Large inn – located in Nicosia and is a famous landmark of the capital. The building architecture is surprising: the stone was most likely used after the other buildings’ destruction. On the first floors travellers belongings were located, on the second – the guests themselves.

The monastery was the main religious centre for the Cyprus island Armenian community for several centuries. But even if you have nothing to do with Armenia, you should take a look at this island medieval architecture monument.

The Byzantines were involved in the castle construction – it was an island’s defence system important part against Arab attacks. It became a 3 mountain castles complex part located in the Northern Cyprus territory. Having bought property in North Cyprus in this area, you can regularly look at this medieval architecture masterpiece!

It was Saint Barnabas who was the Greek Orthodox Church founder, Byzantium independent. Many pilgrims from Greece and the island Greek part come here every year.

Buying a house in Northern Cyprus in this region and not overpaying is real! Contact us and we will help you purchase your dream property.

Tourists and Cypriots like the Kyrenia Mountains area – the Beshparmak peak attracts with its unusual shape: it looks like five fingers. Here you can breathe in the mountain air, and at the bottom, you can taste local cuisine in an authentic café.

Another natural monument is a century-old olive grove, some 800 years old, only about 2000 trees. The territory is protected by the European Union.

Mandarin plantations are mandatory to visit, which attract in winter with their citrus smell, and in summer with the flowers’ scent.

Thus, the huge cultural heritage and natural attractions are another reason for buying a property in North Cyprus.