How the Northern Cyprus Republic appeared

Geographically the Cyprus island is well located, this factor has led to increased attention to it from different peoples. Many nationalities have fought over the island for centuries.

Experts say that people appeared on the island more than 10 thousand years ago, was actively populated by peoples until 2700 BC. It belonged to the Greeks until the 6th century (BC). Greek seafarers discovered the island during the Trojan Wars. At this time, the first city-states appeared on the island, houses in North Cyprus were built like the Greek ones. In 545 BC the island was captured by the Persians, and at our era beginning, the Romans arrived here. For two centuries, life was calm.

In 647, the Cyprus territory was conquered by the Arabs, until the year 900 they shared power with Byzantium. In the 11th century, the island was conquered by Richard the Lionheart and sold to the Knights Templar. Further, the Cyprus lands were subjected to crusades. In the 14th century, the island became the uprisings site and wars: Greeks, Muslims, Turks and Cypriots, after which the Venetians ruled for a short period, which was replaced by the Ottoman Empire. 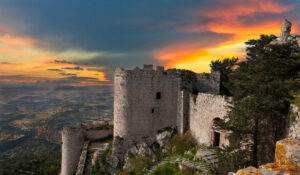 In 1878, British rule came to replace the Ottoman. During this period, the country’s economy acquired a commercial character, but at the same time, an active confrontation between the Greek and Turkish nationalities began. In the post-war period, the situation deteriorated significantly: the Turkish resistance organization was formed on the island. The confrontation with the Greek population continued until the 50s of the 20th century.

In 1959, the island gained independence: military forces and power were divided between the Greeks and Turks, Britain was left with military bases.

The conflict between the Greek and Turkish nationalities

With the independence acquisition, ethnic outbreaks begin in Cyprus, which lead to a military coup in 1974: the Greeks remove the power and declare the Greece island part. Then Turkey intervenes and an armed conflict begins, which result is 38% of the territory under Turkish control (the island northern part) and the Attila line, guarded by the UN military.

Officially, the Turkish Republic of Northern Cyprus was formed in 1983 but was not recognized by other states (except Turkey). In 2004, a referendum was held to unite the two republics into one state, but the initiative was not supported by the Greek Cypriot population.

Now life in both parts is peaceful and calm. The state develops tourism and actively attracts international investment. The rich history, comfortable climate and favourable taxation induce many to buy real estate in Northern Cyprus, the prices for which are pleasantly surprised.