The Cyprus island is the third-largest in the Mediterranean Sea (area 9.3 thousand square kilometers) located south of Turkey. It is washed by the Cyprus Sea and geographically belongs to Asia. The island position is very interesting: it is located at the sea and air trade routes intersection, which provides the country with an important geopolitical role. The island stretches 250 km from west to east and 100 km from north to south. Nature, beaches, and a comfortable climate attract many to buy a house in Northern Cyprus.

The Turkish Republic of Northern Cyprus occupies the island northern part and is separated from the south by the “green line”. Most countries do not recognize the republic.

The authorities are the parliament and the president.

The TRNC territory is divided into five regions: Levkosha, Gazimagusa, Girne, Iskele, Gyuzel’yurt. The major cities are: the capital is Nicosia, the main port is Magosa, and the major resort is Girne. These cities are the most optimal for moving to the country, so most people decide to buy a house in Northern Cyprus in them. 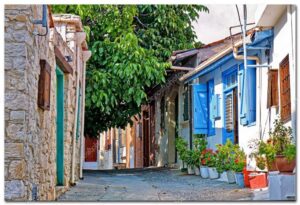 Northern Cyprus is a visa-free state, when crossing the border you only need a return ticket, no medical insurance is required. The visa on arrival is put in the passport or on a separate form. We recommend choosing the second option, as the unrecognized country may have questions when entering other countries.

There are no republic’s official embassies in other countries (the exception is Turkey), therefore visa formalities are simplified. However, you also need to get through Turkey: fly to any city in Turkey, from there – to the Nicosia airport or by ferry. Another option is to cross the land border through South Cyprus.

The country acquires offshore status, so you can conduct banking transactions without commission. By purchasing real estate in Cyprus, it is much easier for you to open an account and start doing your own business. There are a very low tax rate and transparent conditions for investors.

The country is actively engaged in attracting tourists, as evidenced by the wide entertainment infrastructure and low prices in stores. The republic begins to enjoy tourist demand among the CIS residents and far abroad (Asian countries).